What is the future of farmers' protests?

Disclaimer: This is an astrological study that is done in an academic interest to show the application of astrology in routine and mundane affairs. The findings are indicative. This website and the writer do not claim it to be prediction of the political trends on the issue.
इस लेख को हिंदी  मे पढ़ने के लिए क्लिक कीजिये

Farmers' protests are getting intense. On 9 Dec 2020, the farmers rejected the written proposal by the government of India.

There are many aspects which are under discussion about the protest.

The major points which we want to know;

What is the future of the farmers' protests?

Will the agitation be called off?

Will there be an amicable outcome? 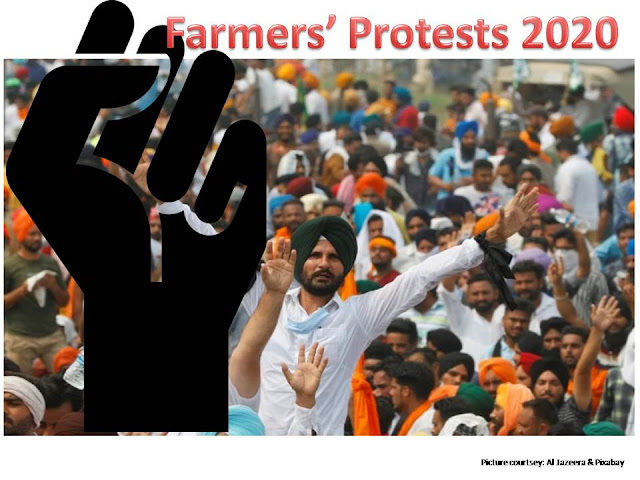 The astrological analysis is done to know the probable outcome of these questions.

Here, I am mentioning the outcome of the study. For the readers who are interested in the technical aspects of this study, the brief details are given in this article.

The farmers will pose strength. The attempts made by the government for dialogue will not bring any results though communication will happen between the two parties (Farmers and Government).

Things will only happen under the boundaries of rules and regulations.

The government will take the stance on the agriculture law to protect it's legal sanctity.

Future of the protest:

As per the question astrology chart, the prospects of further consideration from both the parties (Farmers and Government) will resume after 15 Dec 2020.

The proposals already made by the government seem to be unchanged. Government may use some legal remedy for the resolution which can be one-sided.

By 30 Dec 2020, two points were agreed between the farmers and the government. No fresh offer by the government but the protest intensified.

Supreme court has intervened, and government also exercised the diplomacy by bringing the bill supporting farmers group to project the positive side.

Government is still one-sided with the firmness on the continuity of these laws. 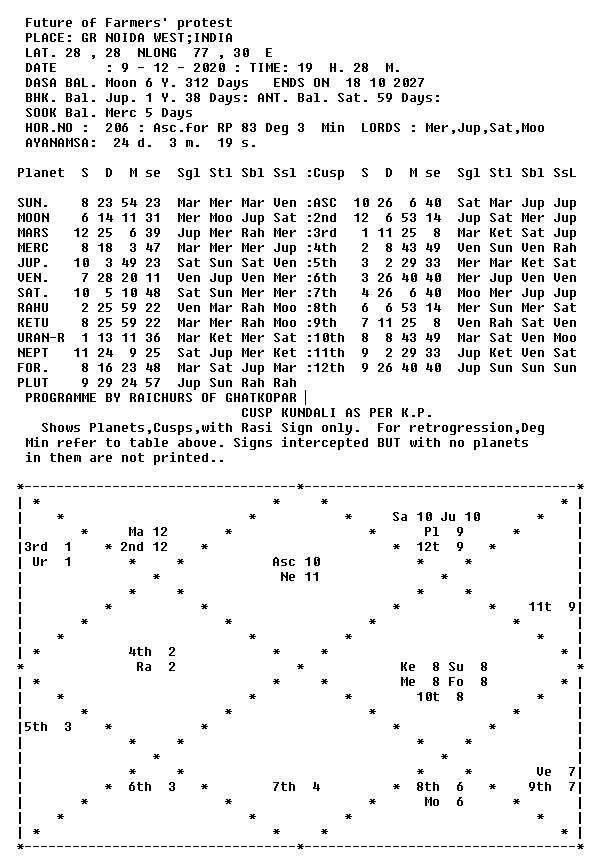 They seem to be strong but 8h in sub brings it down and not progressive house except for 6h in sub.

The government wants to resolve. Will it work?

Examining the 11th sub-lord; represents the desire for a favorable outcome by the

The 11s/l is promising the things getting resolved as per government terms.

Ve is the 10th sub-lord also. 10-house show the legal and policy status which shows a strong stance of the government.

The involvement of Ve and Ju shows the economic affair and, Ju & Ve both are benefic planets thus, it shows that the resolution will come peacefully. The government will be able to convey the stance strongly.

The government is taking the stance of stopping the communication/meeting and that too by the farmers.

As 10-house is dominant and connection of Su and Me are there, with Sa, thus constitutional, legal, and diplomatic remedies will be applied but a negotiation seems to be out of the question now.

The government may change the game plan and stopping the negotiation and further modification in the law.

Mahadasa is of Mo

Mahadasa is on the dual sign. With 8h showing constraints but in sub-lord, 2-6-11 is showing the success at last with a bit of loss as shown by 12h.

Antardasa is showing a bit of a block in the communication and the 12th house showing the loss which is already there as the government has already given offers to consider all the demands for the amendment in law but 10-6 are dominant thus the government the stance seems to be strengthened further.

When resolution will come?

Houses to be considered are -

The ruling planets are:

Additional RP - Ke being the representative of Me as on same sign.

Taking the significators of the mentioned houses and the ruling planets, it is seen that Su will enter in Ke star on 16 Dec 2020 thus it will trigger the resumption of the process towards some resolution.

Based on the above parameters:

Resolution may come between 15 Dec 2020 to 30 Dec 2020 where Government may use a mix of democratic, legal, and diplomatic remedies.